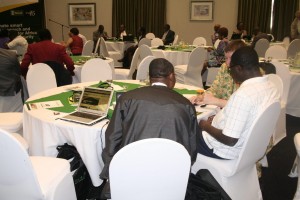 Official estimates revealed Wednesday, on the sideline of the international conference on smart-agriculture research and climate change, that adaptation projects in sub-Saharan Africa will cost US$ 18 billion by 2050.

It said that a number of multilateral partners will allocate funding to a number of successful adaptation projects, in a move to preempt the adverse effect of climate change that is slowly taking a toll on the livelihoods of communities across the sub-Saharan African region.

Latest studies conducted indicate that despite the fact that the key livelihood activity is still agriculture for the large majority of vulnerable community, non-farm activities will be the key element of livelihood strategies for many youth across the continent.

A large part funding used in climate change adaptation are managed by the Global Environment Facility (GEF) which has allocated since 1991, a total amount of US$ 7.1 billion to climate change activities focusing on some key sectors of intervention, including adaptation, technology transfer, energy, transport, industry, agriculture, forestry, and waste management.


The Adaptation Fund which is a financial instrument under the United Nations Framework Convention on Climate Change (UNFCCC) has been established to support these initiatives, but some experts argue that there are many challenges limiting access to this financial resources especially for sub-Saharan African nations.

In its latest recommendation, the Canada’s International Development Research Centre (IDRC) emphasizes the creation of a regional Adaptation Financing Facility (AFF) for Africa that would have a mission to help the promotion of adaptation activities across the continent and channel more funding towards their implementation.

Launching of synthesis reports in the Central Africa region. Regional sensitization and networking of researchers and policy makers. Training workshop on leadership and advocacy with regards to climate change issues.

Launching of synthesis reports in the East Africa region. Promotion of AfricaInteract, networking and consolidating platform of researchers and policy makers and civil society actors. Training workshop on leadership and advocacy with regards to climate change issues.

Study Reports of AfricaInteract titled: Review of Research and Policies for Climate Change Adaptation in Agriculture, Urban and Health in Sourthern Africa.Antananarivo, Madagascar, 30 September 2014 One day training workshop on leadership and advocacy with regards to climate change issues. Make presentations of AfricaInteract to International conferences related to climate change.